A Beginner’s Growth Guide to Pay Per Click Advertising

We’ve all heard the buzzword/acronym “PPC” or the phrase Pay per Click at some point. But you don’t know exactly what it entails or how it works. Well you’re in luck, you came to just the place to get a quick crash course.
Let’s start with something easy

PPC, or Pay per Click, is a way of describing the method of advertising in which an advertiser pays a specific amount of money each time their ad is clicked by someone behind a computer or a mobile device. Oh, and PPC is essentially the same as CPC (cost per click), in case anyone was wondering.

Okay, but what are these Ads that you speak of?

You can find PPC ads anywhere and everywhere, some annoying, some informative, and some funny. Let’s take a quick walk through Google lane and explore this vast expanse of potential advertising territory we know as the Internet. The most basic form, which we have all seen appears here, on the internet’s most popular page with a search for “Basketball Shoes”: 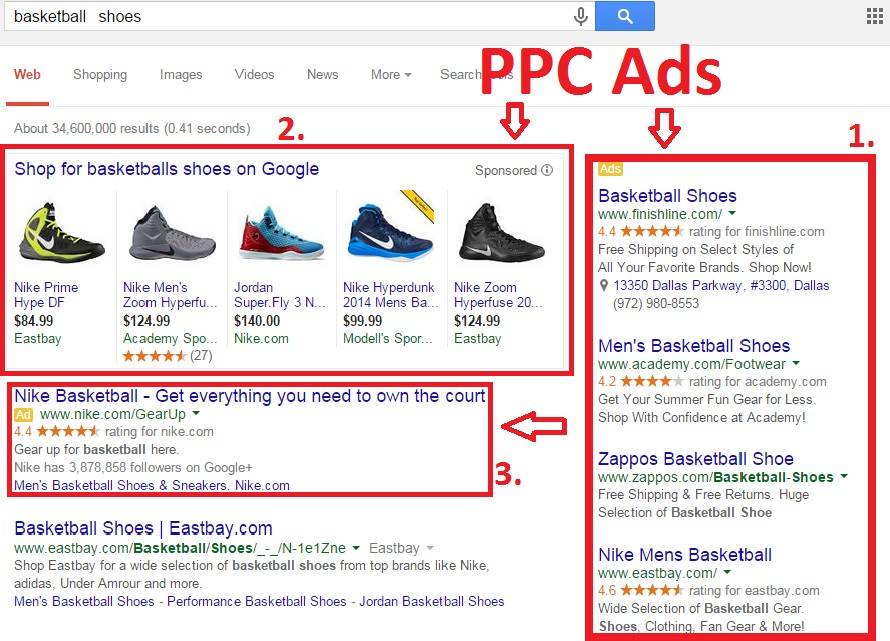 These ads don’t show up in every search, but for highly competitive buying items like these shoes or laptops, they generally show up in these three forms that you can see above.

Each time you or anyone else clicks on these ads (based on an algorithm) these companies have to pay a small fee to Google, almost like a rental fee that a band pays to rent out a performance venue. Except this total isn’t some small-time venue, this total equals to over $100 million every single day. Now that’s one profitable venue.

But you said we can find these ads anywhere

That’s right, I did. Let’s check out the 99th most popular website in the world, The New York Times, and see what they have going on. 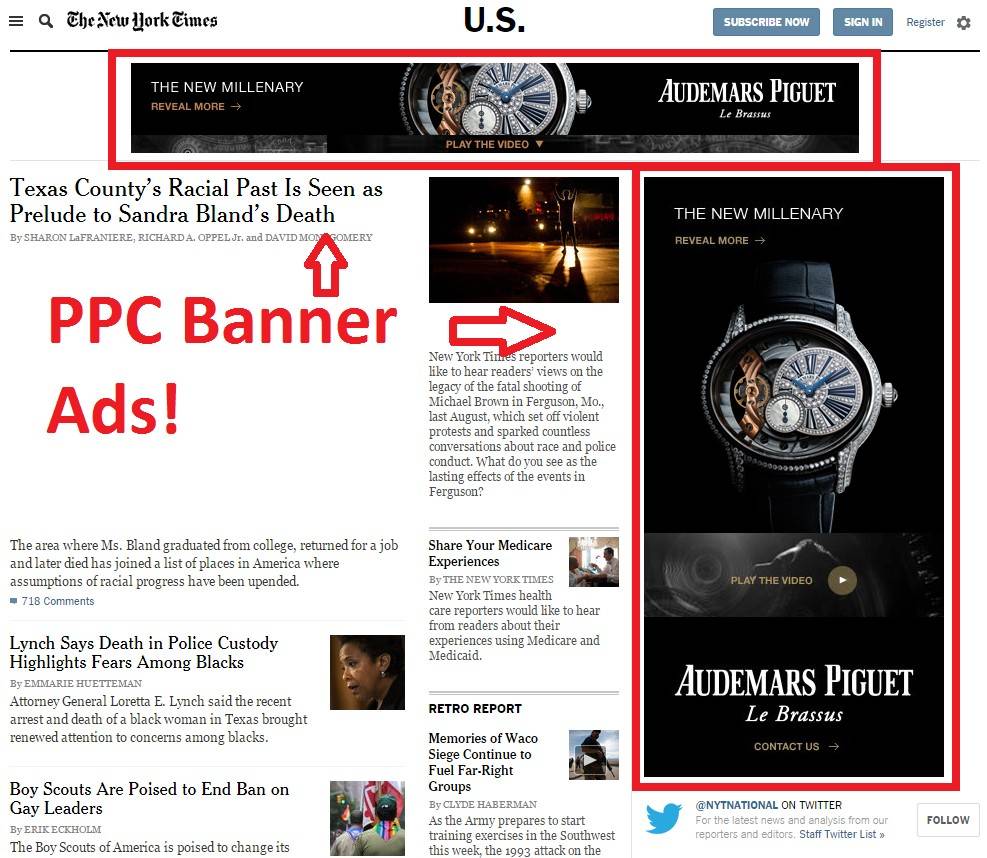 Remember when I said PPC can be annoying? So this along with those ads that popup with the tiny little “x” in the corner that is so hard to click is probably what you thought of. Banner ads like this often cover much of the screen so they’re particularly intrusive and hard to ignore. I personally recommend not straying into this side of PPC but I can’t lie, this did build my awareness of “Audemars Piguet”… even if it is a negative association.

But those other ads were shown on Google search, so who gets paid for this? Well, they all do. Since this ad was created and distributed through the Google PPC platform, if you click on this ad, most the money this Watch brand has to pay for this click goes to Google but a cut of it goes over to The New York Times as well. This is somewhat like a renter’s fee that Google utilizes as space for your ad to show.

Don’t forget, Google isn’t the only place to advertise

Google may be the largest of them all, but there are plenty of other PPC platforms to use, like “Twitter Ads”. Scroll down your twitter feed for less than a minute and you’re bound to run into something related to this ad that @amazon is running right now: 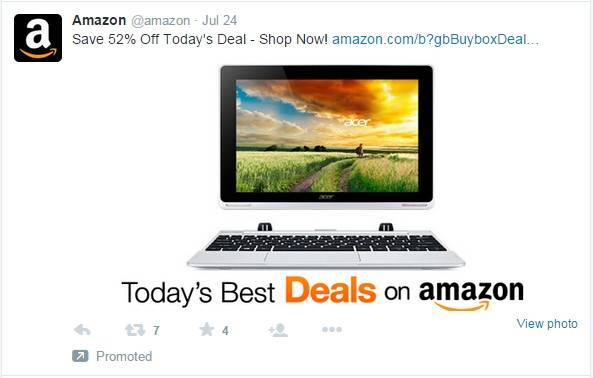 If you’re not sure if what you’re seeing is an ad or something you’re seeing naturally, that little promoted sign in the corner is a disclaimer that this is fair game in the Twitter playground. Again, Amazon does have to pay a small amount to Twitter each time someone clicks this ad.

How does one pay for these ads?

After all this discussion of people paying other people these clicks, maybe you’d like to know a little more about what happens behind the scenes. When you really zoom into the intricacies, this can be complicated, but I’ll just give you the short version.

In Search or Display advertising, marketers usually place a “bid” for a keyword that is being searched by a user, much like yourself. If this advertiser has a higher bid than their competition for this keyword, Google knows that their advertisement leads to a high quality webpage, and that their ad structure has an overall good quality ranking, their advertisement is likely to be shown to the user.

When dealing with highly competitive markets, however, the most popular keywords can get relatively expensive, like “buy luxury car” or “diamond wedding ring”. In fact, some of the most experienced Google PPC users recommend to not use Google PPC in some instances. As stated by Google, always make your priority to think about what the clicks are worth to your company so that you can match your maximum “bid” to that amount, e.g. don’t bid $1 for a click on an ad for bubblegum that costs $.75.

Why people decide to pay for this?

Besides of course acquiring potential customers, PPC ads give your website exposure through increased traffic. The best part is, if you’re running ads that have relevant keywords, the traffic you’re acquiring, is actually looking for you. That’s right, you’re not selling to someone that doesn’t want to hear about you, they’re relevant customers that want to know what you have to offer.

Not only do PPC advertising platforms provide you with keyword opportunities, they’re chock-full of tools that allow the advertiser to whittle down the audience of the ads by factors like user location, user traffic cookies, and user demographic options that you think fit your audience best.

With specialization in Google Ads, Facebook Ads, Bing Ads, Amazon, LinkedIn and more, we have got you covered from Keywords Selection to Conversion Tracking & Reporting.