What is the Changed Relationship Status Between Google and Wikipedia? It’s Increasing Complications

The 11% drop in traffic of 250 million site visitors per month clearly indicates that all is not well between Google and Wikipedia. This happened over the course of one month during last May to July. 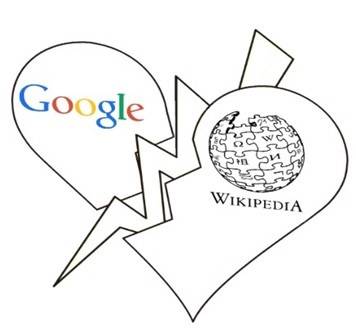 So, what happened to their beautiful friendship?

We all know and love Wikipedia, but why does Google not feel the same about it anymore? Some have speculated that Google tweaked their algorithm to favor branded company pages over Wiki entries to give more overall traffic to the big corporations.
However, on further analysis, it looks more like the whole “It’s not you, it’s me” situation applies here as Google is simply telling Wikipedia that they aren’t needed. Most would like to believe that Google wants searchers to have the easiest time possible when using Google to find information, so Google is indexing Wikipedia lower in the search results since they feel the direct answer that Google is able to provide is more than enough for most people. Like this:

Wikipedia isn’t the only one

Although, this majority of people would like to believe these changes were for ease of use, it looks like Google has other motives. As shown by Yelp’s data science team and researchers at Harvard, this is not an isolated incident of Google favoring their own results over that of a third party.

What it proves is that Google is consistently indexing inferior data sources over alternatives that would be more useful to the searcher if Google did not affect the search to favor themselves.

This is not only a theory. Google is doing this right now. To see this effect in action all that needs to be done is a local search. You will most likely see the classic Google scrape that pulls the top results for local shops off Google Plus and presents them to you with a map view and their links in a presentation called “OneBox”.

With comparative testing, this study conclusively found that merchants and consumers were being done a disservice as searchers would highly prefer to see the natural Google Algorithm’s results rather than Google’s branded “OneBox”

It’s true, no one’s very surprised to see Google promote themselves over their competition, but the question arises “Where do we draw the line?” and to this, no one seems to have an answer. Google grows and grows, especially with the introduction of Alphabet and we have to consider the big, dirty M word, even though we don’t like to think that there are monopolies in existence today. Hopefully, this breakup between Wikipedia and Google isn’t too much of a forewarning of what is to come from Google.