Who are Social Media Influencers and How to Find Them to Boost your Business?

Before you can benchmark yourself or connect with people to help extend your reach, you must first seek out those that are actually making waves on social media. An influencer is more than someone who sets foot into the shallow end and makes a few splashes; they’re the ones that jump into 10ft deep section of the pool cannonball style to have the waves pour over the edges and beyond.

How to define who is an influencer can be a little difficult, especially with so many pages dedicated to doing one thing: baiting people to click links with captivating titles and disappointing articles.

Because of this, only one rule really matters: Influencers are the ones who create action.

This action can be as a simple as commenting on a post to show your support all the way up to driving two hours in order to participate in a national wildlife awareness day.

We all know the number of fans you have is significant, but where the real magic happens on Facebook is reflected in the engagement metric. Because of Facebook’s initiative to keep the spam down in the ranks, they have created an algorithm dedicated to doing just that. Thus, the highest posts you see are those with the best ranked engagement metrics.

In order to seek out influencers with the best engagement, you can either make use of the “interests” function on Facebook, or use a free tool to assist you in your search for social media influencers. Using a tool is recommended as it does save a significant amount of time. One tool known as the best is the “influence ranker” called Klout, which you can see has rated this floating Trump head as an 87, rather high, actually.

To use the built-in interests function in Facebook, search in a hashtag related to your industry that you know of or find the important ones with a hashtag tracker.

Build out the list a bit then wait for a few days for the information to become safely measurable. Try paying attention to:

By using the interest function, you can bypass the usual algorithm and with the news feed you get the real birds-eye-view of how these people or companies are influencing those around them. From there, you can select who you personally think is inciting people to act the most.

Here’s an example of a politician who is undoubtedly the most influential in his “industry” that is absolutely dwarfing the efforts of his competitors:

Unlike Facebook, Twitter shows you the updates that were most recently published, so there is not an engagement bias that decides what you get to see vs what you don’t.

Social Media Engagement on Twitter is important not for the algorithm, but for the retweet. This is the metric that matters the most as this is the single most important factor to determine how far a post will reach.

To find this factor along with much, much more, simply take the name of someone you find to be an influencer within your industry through a hashtag tool, and type their name in here.

With this free tool (klear.com), simply visit the website, type the username in the search bar, and you can find that specific user’s:

Although your social media marketing strategy might not need all the data that this tool produces but you can easily see here who commands attention and who doesn’t.

Here’s a snapshot of a few things you can find, with Mr. Trump as the guinea pig again. 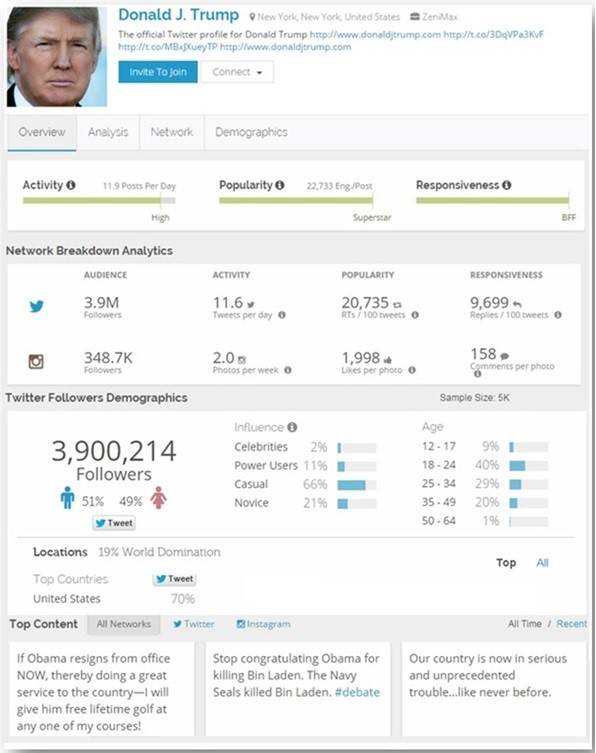 As far as social media goes, LinkedIn is probably best known for touting their branded “Influencers”.

Finding influencers can help your social media strategy, and so can we. Drop us a message to get a clearer picture of how to bring your brand out of the darkness.

With specialization in Google Ads, Facebook Ads, Bing Ads, Amazon, LinkedIn and more, we have got you covered from Keywords Selection to Conversion Tracking & Reporting.